We're all making tracks in the ice

This snow/ice storm is taxing on everyone, including me and Bob.  Sigh ... just like everyone else in this storm. We're thankful that our families are warm, safe, and comfortable.

But the babies will be warmer in the back barn. It has smaller stalls for critters that need more attention. THEY may not want the attention but they're going to get it anyway. Most everyone gets a Red Cell/Power Punch cocktail everyday along with free feed hay and feed laced with Deccox for coccidia. It pains me to lose because of these parasites.

But earlier that day before we moved a few of the ladies to the back, they were faced with a dilemma. No one had a path to their hay feeders. All the pastures were iced over. The little boys were slipping and sliding across the ice, not being heavy enough to break through. The larger boys, on the other hand, were are to break through the ice and make a few tracks to the hay. Those little guys were all over what to do then. I love watching them learn from each other. Goats are quick studies.

Husband Bob went to Bucky's pen to help out those goats by making tracks to their hay.when he noticed that the little girl goats in the next pen were watching him. Once they 'got it' that they had to break through the ice, they marched right over to their hay in their own path. These goats are so much fun.


But later that afternoon we noticed that the cold was getting to a few of them. Those are the goats that are now in the back barn. Everyone is looking better after only one night. We're thankful that we have enough shelter, hay, feed, water, and minerals for everyone.

More snow! Mother Nature WHAT are you thinking 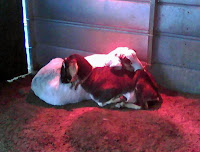 We have put heat lamps in the goat barns and have just given them plenty of fresh hay and water. So they're secure. That silly horse still goes outside at times. We just brushed the dried mud off him yesterday. Hopefully, he won't roll in the snow. Stupid he's not but a horse he is.

We love living with this guy. The Husband and I have wanted horses since 1994 so we have tons of catching up to do.

When we first got him, he stayed outside for the longest time. His previous home didn't have a barn for him, so I'm thinking he was used to being outside. But when he did get comfortable inside, he stayed inside -- especially during the summer. We have 4 foot fans blowing into the common area. Silly horse, he'd put his face in the strongest wind then stand there for the longest time. He's a hoot. 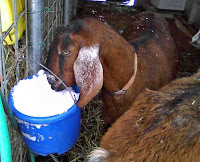 OK, I've thawed out now. I'm feeling better. Should I mention, Mother Nature, that it's still snowing. Sigh ... . Thank you for the fresh, clean snow. I'll shovel that into the goat water buckets so they'll have clean drinking water. Their buckets are heated so it doesn't take too long for it to melt.

Thinking of you fondly,
GaNann of goats (aka Pat Allen)
Posted by Pat Allen, Owner/Operator at 9:52 AM 1 comments

Now that you have poop in your hand, what's next?

Somewhere in Internet land is a comment about falling in muddy pasture dirt in the chicken area. Lost it. Can't find those comments anywhere. In lieu of starting over, I'll just move on.

Last year we had several paths of rock strewn around the barn. No more falling in the chicken yard for me. I still cringe at the thought of what I had fallen into. ughhhhhhhhh. No, those clothes did NOT go into the washing machine as is. They were hosed down in the barn first. Then put in the washing machine a few days later; after I made sure no 'clumps' had dried on them. One of these days we're gonna get a heater for the barn. It's cooolllllddddd.

At the time, I didn't think about the micropisic critters in the barn mud that were crawling all over me. But my poor goats live with them 24/7. I had briefly mentioned parasites, in particular coccidia and how it had killed several goats. (I'll always be sad about this. But each goat death has lead to a process change, barn enhancement, or new/different/upgraded something.) This past snow storm has ignited the need to flatten my learning curve on fecal testing. OK. I'm on it. Fecal testing is my game. Come to find out, it wasn't as difficult as I had thought.

Now all I gotta do is conduct enough tests that I'll be an expert in identifying the parasites. Husband Bob is famous for his researching skills. He has collected the best equipment along with the most in-dept text books on parasitology. These tools should allow me to better care for my goats.

That's how I know coccidia are in the pastures. After identifying the parasites, then I had to figure out which deworming chemical to use. There's more than one for each little critter. I tested the herd not individual goats, this time. As I learn more, I'll be able to more quickly go through the herd and identify a goat's individual needs.

I'd used Corid for years and had given my poor doomed goats Corid drench, albeit it too late. Only recently have I become aware of its side effects. In searching for more information I turned to Fias Co Farms. Here's their link http://fiascofarm.com/goats/coccidiosis.htm. I also researched the Merck Veterinary Manual, and several deworming suppliers. Now I have several options for coccidia instead of only Corid, which I will not be using any more. And I have confidence in my research. I know which chemical to use and how much to use. Since most goat meds are 'off label' dosage can be tricky. But I always check with my vet before using a new anything.

After weighing several options, I've decided to feed my goats food medicated with Decoquinate through the winter months. Corid didn't work for us, maybe the parasites had built a resistance -- which happens. Now I have options for coccidia and will be more aware of which animals have the most parasites.

Now that the coccidia are being handled I get to focus on the stomach worms I found. While my goats have fewer stomach worms than they did coccidia, those little critters still need to be addressed. I'll address them, all right. My little goats will be dewormed then in 10 days I'll be conducting fecal tests again to make sure the meds are working. I'll no longer rely on watching for diarrhea or of wishing I could find out which parasites were taking over my little goats so I'd know what to do next. Checking their eyes is critical. The FAMACHA methodology helps me there. It works.

I'm still of the frame of mind that I want to care the best for my goats and not let the weak ones die out. I want to give them the best chance possible, even if that means picking up poop every day then putting in under a microscope. After all, look what Mike Rowe has done with a career of picking up poop.
Posted by Pat Allen, Owner/Operator at 5:25 PM 0 comments