Here is another black and white doe for sale. I say black and white but her coat has a golden tint to it. This little darlin' is about 18 months old and ready to breed. Her exact birthday is on her papers but I'm guessing here. 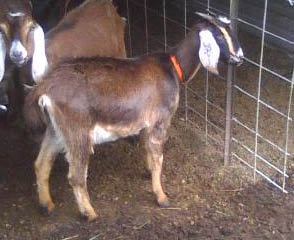 Posted by Pat Allen, Owner/Operator at 11:57 AM 0 comments

Links to this post
Email ThisBlogThis!Share to TwitterShare to FacebookShare to Pinterest
Labels: black and white goats for sale

Black and White Goats For Sale

For this go-round I was able to capture pictures of two goats: Emily and Loretta. I have others but these two cooperated.

Emily is in the green collar whereas Loretta is in the purple collar.


I have others but they would have nothing to do with me that afternoon. They stayed in the crowd. As soon as I can isolate them a bit more I'll upload photos of them.

I appreciate your interest in my goats.
Posted by Pat Allen, Owner/Operator at 8:09 AM 0 comments

How I Feed My Goats

Folks who have bought goats from us quite often ask how I've cared for then so they can continue the regime. The answer is somewhat detailed and lengthy so I decided to put it here for everyone to read. Besides, this way I can update my notes from time to time.

First and foremost, I care for my goats depending on what the individual goat needs at the time. Whenever possible I separate the herd by feeding needs -- ah, except for the boys and girls separation, that is.

For the over all herd:
Everyone is are free fed the following:

For lactating does and babies:
In addition to the above, they are fed a sweet feed with 14 to 16 percent protein.

For the babies:
When the babies are about two-weeks-old I set up the baby feeding area with a creep gate. This magnificent gate keeps the larger goats out and away from the food so the babies will have a chance to eat without being mobbed. These little babies are figuring out what solid food is and don't need the competition.

When the babies are weaned at about 12 weeks, I can either continue milking the does or gradually dry them up.

I did one detailed weight analysis to get an idea of how much hay would be needed. I weighed every goat then did the math to find out how much hay to feed. This was nice to know and gave me an idea of what to expect.

Now I guesstimate based on how quickly the goats eat the hay. If it's gone in 3 hours, then I didn't feed them enough. But, if it lasts over 5 hours and they're off lounging and they're chewing their cud, then I've probably fed about right. However, if hay remains in their feeder the next day, then I've way overfed and need to cut back.
Posted by Pat Allen, Owner/Operator at 9:57 AM 0 comments

Links to this post
Email ThisBlogThis!Share to TwitterShare to FacebookShare to Pinterest
Labels: and baby kids, feed goats, lactating does 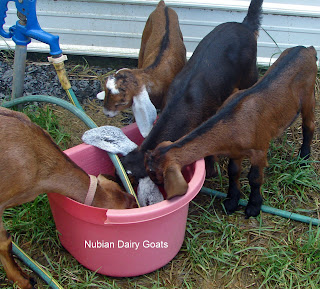 Posted by Pat Allen, Owner/Operator at 8:34 AM 0 comments

Most of the goats are grown now. I just haven't had time to update the pictures.

I appreciate your inquiring about my goats.