Many of you have wanted to know more about the goats. What an honor it would be to introduce the herd to you. But first, allow me to give you a timeline for the past year. Just to quickly get you caught up.

The barn (aka The White House) was finished in early November 2007. It's a metal building with a partial concrete floor, water (complete with an outside drain), electricity, and fans, fans, and more fans. We designed it with ventilation in mind 'cause we have hot, humid summers here in North Carolina. When mama is hot, ain't nobody comfortable!

We used a PremierOne panel system throughout and it's working well. It's a 2 x 2 inch welded galvanized steel panel based on a 4 foot module. Modules are efficient in many ways, for us anyway. The Husband is an architect and thinks 90 degree angles and modules.

We used livestock panels to make our own hay racks. Since the goats mob each other, we made two hay racks so they can run from one to the other. What a hoot. When one goat moves the the other rack, they all have to move to the other rack. But, surprisingly, one or two goats have learned that by staying put, they have the hay all to themselves.

We have two handsome bucks: Bucky (dad) and Vince (son). Vince bred Bucky's daughters in the front pasture while Bucky bred his favorite ladies in the new barn. Then, like magic, the babies started arriving 155 days later.

What a georgious group of babies! We are blessed with 6 girls and 5 boys. Some are black, like Bucky; and, some are brown, like Vince. All are doing well, growing as usual and sucking up the milk like little pigs.

They've been disbudded, too. Actually, Dr. Betka disbudded the first batch while I disbudded the second batch. Since this was my first attempt at disbudding, I was unnerved quite a bit. Scarry is a mild word for what was going on with me. Imagine putting a branding iron on the top of a baby's head, smelling the burning hair and flesh, and listening to them scream! Holding them still while burning the top of their head wasn't an option so having a helping hand is mandatory. Terrific! now I could burn my helper, Cody. She's a high school student who help us our here. Cody is indespinsible. Without her, we'd be wayyyyy behind on our cleaning and managing chores.

Email ThisBlogThis!Share to TwitterShare to FacebookShare to Pinterest
Labels: About the goats ...

Whew! What a trip the past few weeks have been. Baby goats have come into our world right and left. Seriously. 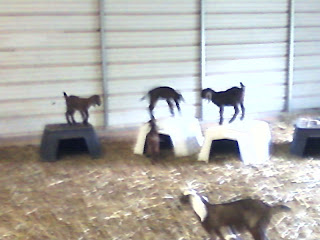 Seventeen little darlings have arrived so far; with one more doe due any day, ... the wait continues. Kidding season demands that someone be at the ranch 24/7. In the past, it's been me and my barn cot. But this year we have Jordan and, it's been the best season ever.

Jordan has been sleeping in the barn for the past two weeks. As well as one can sleep with 10 mamas and 17 babys bouncing off the metal barn walls. Oh yeah, the babies love rumnning UP the barn wall ... guess they like to see how high they can go. Either that or the like the noise. This photograph shows the walls and will give you an idea of how they could run UP the wall. The ridges help them go higher, and the sand gives them a soft landing pad.

The babies are on top of these dog houses more than they are in them. Not quite what we had in mind but, hey, their creativity is what makes the barn such an interesting place. The mamas are not too happy with the dog houses because their babies get inside and go to sleep -- out of sight. We're always lifting the houses to locate a baby so mama can stop fretting. Oh yeah. the mamas do take care of their babies.

It's a good thing Jorday already has a pet mouse. Otherwise, she'd probably want to take a few of the barn mice home with her. Instead, she's just been feeding them. Go figure. 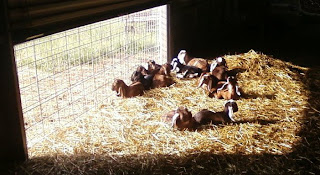 The babies are a hoot. They run and jump in spurts then nap in clusters.

Mama Gayle is feeding her 5 pound baby Moon while she looks for her OTHER daughter. Watching these mamas care for two or three babies makes me want to help them even more. We keep the families in seperate pens for the first 3 or 4 days so they can get to know each other before we put them in the mall area. 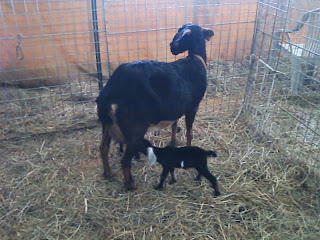 It sort of goes without saying that my days (and many nights) are devoted to the goats instead of making soaps. But we're almost through this kidding season so soap production is back on the daily life schedule here at the Sleeping Dog Ranch Nubians.

We hope you enjoy reading about our life in the barn.

More later ...
Pat Allen, aka Gran' Nanny (It's wonderful loving on the babies then putting them BACK into the pen with their mamas.)
Posted by Pat Allen, Owner/Operator at 2:54 PM 0 comments