After a lifetime of living without horses, we now have the horses of our dreams. Bentley came to use a little over a year ago and has had the steady companionship of several goats; and now Lorch has come to us on June XX 2011. This way the two horses can be together and act like horses by dominating each other and playing horse games.

We've redesigned the barn interior so that the goats are in the back while the horses are in the front. This way, hopefully, we'll have no more little broken goat legs.

Right off the bat we knew that we'd need a mounting block because Lorch is a big boy. Solid black, well almost, he has one white sock and a white spot on his forehead, he matches Bentley, who really is solid black.

This first photo is when Bob was riding him in some friends front yard. The Thompsons know their horses; I met Angie several years ago through a vet I used to use and her husband Darin has been our farrier sense we got Bentley a little over a year ago. Besides working for a vet, Angie rides Arabians in endurance competitions. With these credentials, we knew that we could trust our friends about their recommendations for Lorch. So Bob got Lorch for a birthday present.

I'm used to things being on the goat-scale of life. If I get stepped on, it hurts but my foot isn't broken. Well, now we have to be much more careful. It's taken several months of living with our horses for me to be comfortable with being around them.

Since Lorch moved in with us, we're now acquired one saddle. It took several months to research them just to figure out what we wanted. One just doesn't go in to a store and select a saddle. So many options are available that it boggles the mind.

We have two bits, one saddle, half a bridle, and saddle blankets.  The other parts will come but it takes time to learn. We take our time because we want to enjoy the process.

Theses will probably be the only two horses we ever have so we want to fit them well.


Mr. Wonderful Helps Himself to the Feed Bag

Remember that feed storage can (aka trash can) that you so carefully put the horse feed in? Well, we need to relocate it. Why you ask? Ah ... because Lorch make himself at home with that NEW UNOPENED bag of feed. Here is the evidence. 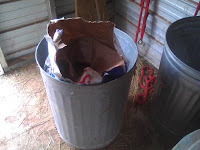 I pulled the can away from the wall then took the pictures. The can lid was on the ground next to the other can lid that he had removed. 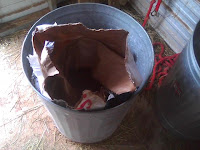 It's hard to tell how much feed he ate but he did a number on the bag. I can't find the paper shreds anywhere. Guess he ate them.

I forget that his head is about as long as his neck. The day of having our feed cans neatly tucked next to the fence are over.

Yes, I'm naming Lorch because none of this activity took place when Bentley was the only horse here.
Let's hope that Bentley doesn't learn too many tricks from Lorch.

Bob and I have wanted horses for several years but never found the time nor the right horse. That is until ... Monday. Jordan mentioned that Little Man was for sale. Little Man! For sale!

Bob had ridden Little Man, a TWH. He fell in love with his ride. Aglow when he returned, all he could talk about was how smooth LM's ride was.Perfect! That's all I needed to know.

After telling Bob that LM was for sale, I immediately called Amy, our vet, to talk to her about him. She confirmed that he was for sale. Told me the amount. Fine, I said, "I'll take him." She asked if I was serious. "Well, of course. Does this price include delivery?" 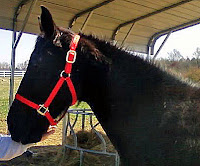 She told me that she could have him ready by Friday, if I could wait that long. Hey, it's better she come to closure by preparing him, than me rushing in. "Fine," I said.

That nigh Bob and I talked a bit more about bring a horse on board.  We reminded each other that we'd wanted horses since 1995 (this is 2010) and that if we only had him for a while, then we would have completed our dream. By bed time he was still uncertain.

The next morning he was working on liking the idea of getting Little Man. God love this man, after being married to me for almost 30 years, he bounces so well.

I'll keep you posted on our progress. We have much to learn and Little Man is the horse who can do it.