Just put an ad on craigslist for purebred nubian goats for sale.

check it out!
Posted by Pat Allen, Owner/Operator at 10:13 AM 0 comments

For the most part goats handle freezing temperatures quite well. That is, if they have shelter, food, water, and are healthy. Our focus for the past several months has been to boost their immune system, reduce their internal parasites as much as possible, and put a bit of weight on them for added insulation. Next we added a few heat lamps and several large dog houses so they could huddle together and keep each other warm.

So far they look fine. Our efforts are paying off. BUT ... winter is just beginning. We have to keep up these businesses practices throughout the winter so MAYBE we won't lose any body this winter.

We lost two breeding bucks last winter. Both had internal parasites and lost their battle against the winter weather. Coccidia and Barber Pole parasites have been our main killers so far. Maybe ... just maybe, we'll win this battle this season. I'll keep you posted.
Posted by Pat Allen, Owner/Operator at 9:46 AM 0 comments 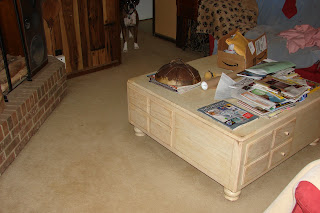 We have a square coffee table that extends into a major aisle where everyone can run into it. We're a busy family with four dogs, two humans, and two cats. With this mix of family members someone is always either chasing or being chased.

The table measures about 42 inches square and is about 18 inches high. Each corner has a drawer on it that is seldom used but we like the look. Although, we would gladly sacrifice one of the drawers to have one corner cut off. 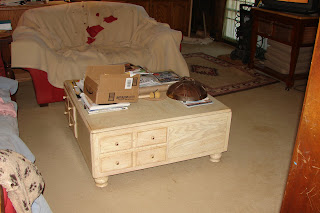 I'm thinking that the sacrificed drawer face could be used on the cut off part for design continuity and new legs could be turned to match the existing legs. We'd like for the re-designed area to match as much of the existing table as possible.

However, I eventually want to refinish this table to a turquoise washed effect because we are Native American fans and have decorated our home with many Native American artifacts.

Ah ... do you refinish furniture, as well?  If so, this piece and a dresser in the bedroom both need to be refinished in a turquoise wash effect.

I am open to design options if you have better ways of redesigning this table. Thank you for your consideration. I look forward to hearing from you about redesigning our table.
Posted by Pat Allen, Owner/Operator at 5:51 PM 0 comments

Did I mention that we got a barn cat?

The mice were running off with too much goat food, leaving too many nests, and otherwise terrorizing us ... flashing throughout the day and night. Brazen little hussies. Chewing parade halters and scaring the barn help is not nice! They had to go!

Mr. Dillon came from a friend's home who had just had their first grand baby and the cats were too much. Hey, I understand just 'too much.' I was happy to have him. Thank you.

His name is Mr. Dillon 'cause he's in charge of protecting all the food supplies in the big goat barn. We figured since he was marshaling the area, he needed an appropriate name. Mr. Dillon stayed in the barn for about a month, never leaving it and always greeting us at his food bowl. He was getting fat and the mice became scarce. Perfect!

Anyway, Mr. Dillon looked kinda lonely making his barn rounds by himself so I was on the lookout for a companion. Mother's apartment complex, for some reason, always had stray cats roaming around so I started looking their first.

Within the first week, the cutest kitten just walked right into my arms. Keeping within the theme of Dodge City, Mr. Dillon's new companion would be named either Festus or Ms. Kittie. Didn't know; didn't care. Mr. Dillon needed a companion.

Ms. Kittie is home from the vet stay (being spayed, of course). Now I had to contain her for 10 days so her stitches would heal. Terrific. Now the winter weather was settling in and the barn would be too cold for cats. (The goats would be fine in these temps but the cats would be too cold.)

Did I mention that we have two basement cats?
Posted by Pat Allen, Owner/Operator at 9:58 AM 0 comments

On December 23, 2009 our buck, Bucky, ripped several inches of skin off his shoulder. I had gone out to feed when I noticed that his shoulder was bloody. Upon closer inspection, I found that a strip on his shoulder about 10 inches long and from 2 to 4 inches wide was missing. AWK!!! MISSING!!! Bob and I searched everywhere for the missing hide but couldn't find it anywhere.

Needless to say, I was on the phone to our vet, Dr. Amy Betka. With goats, your vet should be on speed dial. She's a 7. We decided to take him to her hospital because it was about 20 degrees in the barn.

She sedated him then started sewing him back together. Yup, she found the skin. Luckily it was still attached but had folded under his skin. 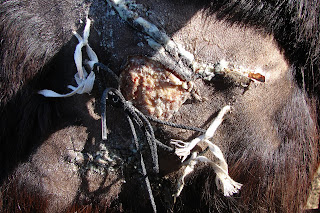 Following her stitch-work, her instructions were to clean his wounds daily, give him antibacterial shots for seven days, then keep her posted on his recovery. Here we go ...

EVERYTHING is covered with a chlorhexidine-medicated salve to help keep his would clean. All-things chlorhexidine are wonderful. I say 'help' keep his wounds clean because, hey, it's breeding season and there are clearly no ends to which a buck will to go reach his does. Sigh ... .

On the shoulder part without skin, I thoroughly cleaned it daily with warm water and a surgical scrub, coated it with a heavy layer of salve, covered with gauze, then secured the gauze with a clever bandage devised by Dr. Betka. The strings you see are for a 'shoestring bandage' that helps hold the gauze cover the raw muscle. After covering the wound with gauze, I gently tie a shoestring criss-crossed over the bandage to hold it as securely as possible. It works! Well, most of the time he leaves it along.

His stitches look good; he has no fever, and his energy level is as high as ever. 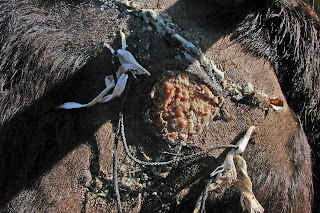 Bucky has been our main buck for years and although this is his first/only major injury, we've decided to nurture a few more bucks as replacements. He's given us several handsome boys that are vying for the job. 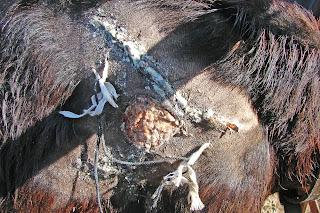 Yes, we're late in the breeding season but health first is our motto. Besides, I prefer late spring babies anyway. I like that the babies will be inside their mama during the LAST frost. 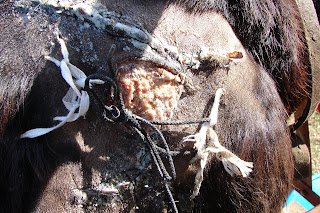