But, you know, I observe the herd several times throughout the day and both of these little guys looked healthy, alert, and ate along with everyone else. They gave me no clue as to what was going on with them. No clue from the edge of the fence, that is.

Lessons learned: get in there, get a hold of your goats, physically check their eyes, their poop, and their temperature; maintain the logs, watch for trends; know which goats have 'tendencies' or 'weaknesses' then retire them. The emotional and financial devistation will be worth NOT breeding these guys again.

The objective for having goats is to have goat milk for our skin care products (soaps and lotions for now). The objective is NOT to have so many goats that they don't have room to run, graze, and be healthy. We're reckoning that we'll be reducing our herd production next year.

We'll be making a few changes next year; but we're not really sure what they'll be yet. Please stay tuned so you can help me decide.

Thank you for all your support.
Warmest regards, Pat Allen, MidWife
Posted by Pat Allen, Owner/Operator at 7:01 AM 0 comments

The White House is clean. Whew! what a job. The poop accumulates so f-a-s-t that we lost track of how long and how deep it was to dirt in there. Special thanks go to the team who dug to dirt. Those guys are wonderful. We ranchers just couldn't do much if it weren't for the younger folk. Thanks guys!

PS We call it The White House because it is white, houses the new and the old goats, is full of hot air (the fans run 24/7 just so everyone can breath), and is living quarters of the poop-makers -- our beloved Nubians.
Posted by Pat Allen, Owner/Operator at 7:26 AM 0 comments

I had noticed that one or two of the babies had been limping over the past few days, but didn't know what was going on. I never saw how they hurt themselves. I did, however, know that they had been jumping on the barn walls because metal is noisy when it gets hit -- especially with 17 baby goats hitting the walls at various speeds and all times of the day and night.

I'm guessing that Trace jumped on an interior fence and got his leg caught in one of the holes in the fencing. I first noticed that he had been limping for a couple of days but NEVER put his weight on that little leg, while the other kids had been walking on all fours, sorta.

It was time to check it out. Sure, with a ginky leg he'll be easy to catch. Ha, that little bugger could move. Finally, I caught him then started examining his little leg. He fussed big-time when I moved his wrist/ankle.

These guys have an incredible pain threshold when they want to. Other times they'll scream at the top of their lungs if you touch them. Anyway ... a trip to the vet was in order. Field trip!

Two x-rays told the story: YUP it was broken. It was, however, a 'good break'. If you consider broken anything as 'good'. I believe that means 'it will heal well'. Hope so ... .

The vet wrapped his little leg in heavy gause then covered it with a bright lime green vet-wrap. Terrific ... hey, if you're gonna be ginky, you might as well 'look good.'

Back at the barn ... the photos tell the story.

When he first entered the Mall, everyone seemed confused. Little sister, Emily, was the first to greet Trace. 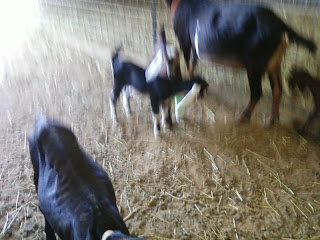 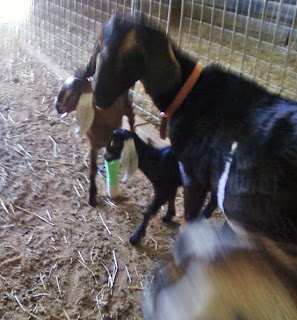 Then, as the others noticed something different, they began hovering around him. 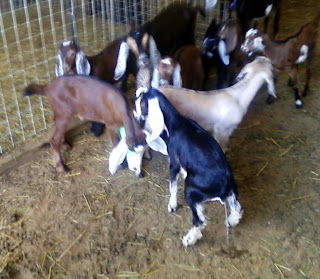 mama came in and all was right with the World.

Mr. Trace gets two baby asprins in the morning and evening to help with the pain. By the way, he does like his cherry flavored asprin. We go back to the vet weekly for a cast change.

At this point, we don't know how long it will take for his leg to heal. But, Trace's mama soothes him at night and his sisters nap with him during the day. We keep the siblings in a pen so he won't have to run and jump with the others.

Little guy needs his rest.
Posted by Pat Allen, Owner/Operator at 5:29 AM 0 comments

Email ThisBlogThis!Share to TwitterShare to FacebookShare to Pinterest
Labels: One of our new babies broke his leg ...
Newer Posts Older Posts Home
Subscribe to: Posts (Atom)